In a previous post about Pinboard, I mentioned how I use OpenMeta tags to tag all kinds of different files on my local machine and then search for them using an app like Tags or Leap. The one missing piece is a script that goes through all of local copies of my Octopress blog posts, reads the categories and assigns them as OpenMeta tags. Not anymore.

For a while I have been using Hazel to copy new posts from my Octopress source/_posts directory to an Archive folder in my Dropbox (that also holds my Pinboard archive, my Twitter archive 1, etc). The script lives in this Archive directory and applies the tags to the copies, not the originals. This script requires the OpenMeta command line utility to be installed 2. Here are the highlights and the full script is here.

First off, a big thanks to Brett Terpstra for helping me out with this script. And this is the very first script I have ever written, so it is very likely there is a better way to do this. There are some additional caveats that I’ll get to below. The script does the following:

But having to fire up the terminal and run this script every time I make a new post wouldn’t very nerd-like, would it? I have another Hazel rule that looks at the Archive folder and runs the script when a new markdown file appears.

In order for Hazel to be able to run the script, make it executable with the following command in the terminal:

Update (30 Jan 13): Regarding point 3, here is a modified script that runs only on a single file. Use Hazel to trigger it on newly archived posts.

So Why Do This?

Tagging files make finding stuff much easier than drilling down into folders. I have over 1500 OpenMeta-tagged files in various places on my hard drive. Most are in DropBox, but many specifically are not, and I use a variety of tools to find them.

I really like the Finder replacement, PathFinder. You can tag files from the app and OpenMeta tags can be displayed in any list view. Here is a screenshot of my Octopress archive folder:

I also use Leap to search for tagged files across my computer. Here is a screenshot of my ‘octopress’ tag, showing archived Pinboard links, blog posts, nvALT notes, and a Jekyll screencast: 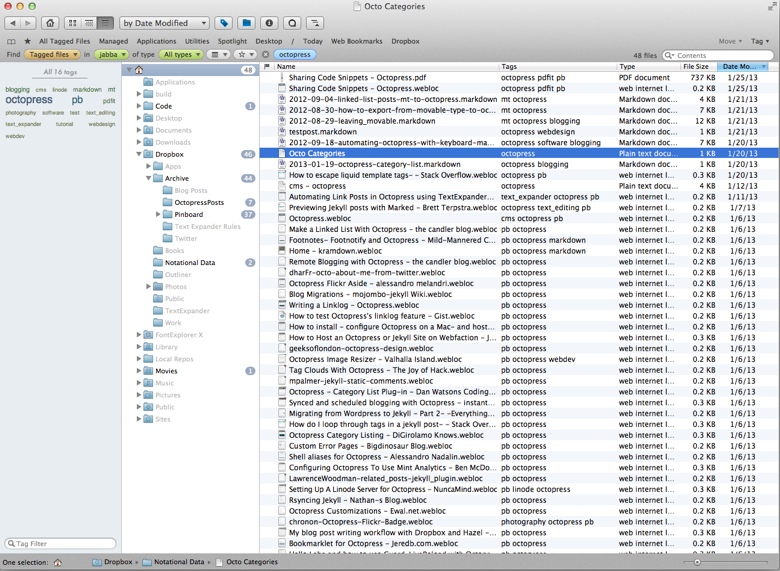 Leap also has a nifty tray that slides out from the side of the screen when you drag any file. Drop the file on it and a tag window with a list of recently used tags appears:

Tags.app is my go-to tagging mechanism. Shift-Command-Space brings up a window similar to Leap whenever a file is selected. Both apps are smart and use tag completion in their windows. Tags also has a search shortcut, which replaces the Spotlight search window: 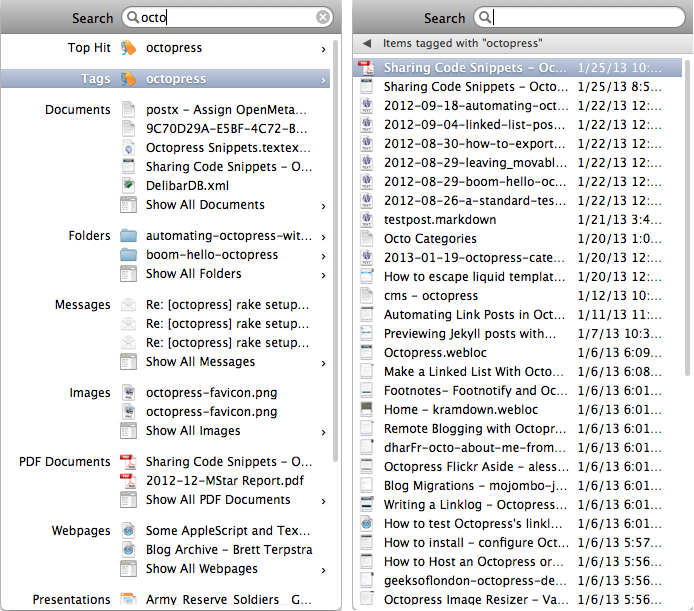 OpenMeta tags are awesome and while their future in OS X is a bit cloudy, they are still a key tool for me for keeping things organized and finding them later.